The cardio training, or aerobic workout, assumes that the energy required for a movement is generated by means of the aerobic process, namely that the energy demand is met by metabolism of oxygen.

In order for this process to happen, physical activity should raise the heart rate and lung activity in a moderate way, sustainable for a long period of time … getting the body gradually tired. 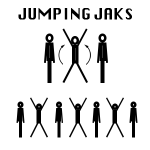 Jogging, running, cycling, swimming … Generally, it can be considered “aerobic” any activity that implies to move a lot and continuously (QUANTITY). 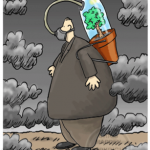 Just few minutes of these jumps and you already feel the aerobic effort that tries to compensate and sustain the movement. The arms, in this type of exercises, very often behave like bellows, increasing the cardio effort in a shorter time compared to the same movement of legs accomplished without them.